Access Of Diabetes Care: The Failure Of The Diabetes Ecosystem To Care For Patients

I have previously written about my own experience with the healthcare system and why I believe existing models of care are not yielding any meaningful results. My objective in writing these articles is to highlight the deficiencies in the current models of care, and to ask the difficult questions that most providers will simply not ask.

This year’s World Diabetes Month theme is ‘Access to Care’. Whilst access to care in the United Arab Emirates is second to none, access to optimal care when it comes to diabetes management falls short on many fronts due to the misalignment between payors and providers. This article highlights some of the real-life issues that stand in the way of patients and their access to appropriate, evidence-based care.

There’s a reason why issues related to diabetes disproportionately consume 1 in 4 healthcare dollars in the United States. There are further reasons why metabolic diseases roughly affect around 40–50% of the total population (taking into account pre-diabetes and obesity) in developed countries, including the United Arab Emirates. There is very strong evidence that the way we are currently practicing chronic disease management is simply not working.

I’ve mentioned previously the key differences between GluCare.Health’s model of care vs. traditional care, and how using novel methods of diabetes management, driven by the use of technology, are vastly superior to what is currently being practiced. In this article, I will further outline some of the deficiencies regarding access to optimal care by the existing systems due to the mentioned misalignment between providers and payers. If a provider follows the American Diabetes Association (ADA) guidelines, here is how a typical workflow for an in-clinic visit would look like: 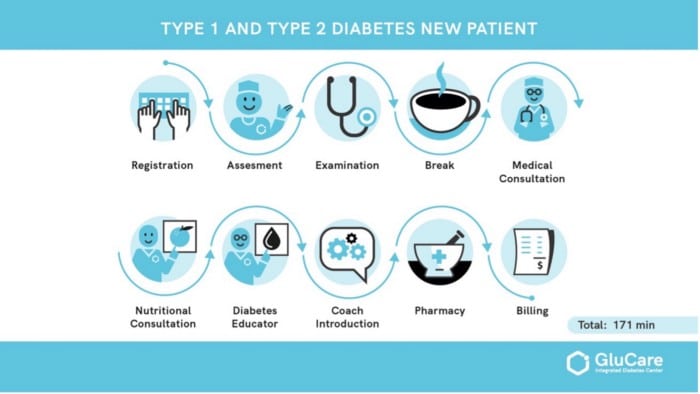 Now herein lies the problem: There are huge discrepancies between what should be done in terms of care versus what actually is done. Why? It is partly a reimbursement consideration and partly a commercial profitability consideration, rather than any fundamental consideration being given for outcome-based decision criteria. Under the existing fee-for-service reimbursement model of care, providers will only do what they will be paid for, not what is needed to optimize outcomes or that which is in the best interest of the patient.

I’ve attempted to summarize each of the problems in a stepwise manner. There isn’t one specific part of the payer-provider ecosystem that is leading to worsening diabetes rates. However, collectively they yield catastrophic outcomes and a huge cost on our societies.

In the UAE, most payers do not pay for a nutritionist or nurse educator, key personnel needed to educate the patient on their behavior. And since providers do not get reimbursed for this, they simply do not provide the service. Nobody wants to see their margins erode in a fee-for-service model. How about health coaches? No chance. Three of the steps shown above are essentially not being paid for by most payers.

I have heard many patients mention that when first diagnosed with diabetes, their physicians simply told them to Google what they should do, or even worse, they were given a generic list of diets/exercises to follow. This lack of patient education and personalization only worsens outcomes down the line.

Whilst the ADA guidelines stipulate that every insulin dependent diabetic should be on a continuous glucose monitor (CGM) as standard protocol of care, good luck getting an insurance company to pay for it! Insulin pumps? Forget that as well, too expensive. There is a mountain of data that show drastically improved glycosylated HbA1c (and glucose Time-in-range) when using these devices consistently. We know these devices are inherently expensive, and over time, prices should go down. But that should not mean denying patients such important tools now. The ROI is clear, but it is measured on timelines that don’t match the incentives of existing payor/provider contracts. The approval by payers is rather a factor of correctly underwriting policy risk and incorporating the relevant costs of these devices. It implies payers are basically telling providers: ‘Go ahead and manage patients, just not optimally’.

Considering 75% of the 1 million people with diabetes in the UAE are poorly controlled, it only makes sense to use all tools available to improve clinical outcomes. Denying reimbursement of medical devices simply postpones the problem down the line when the complications inevitably start.

Fact: It is 10 times more expensive to manage a poorly controlled diabetic versus a well-controlled one.

This is a prime example of the need to incorporate new reimbursement models of care that are based on outcomes rather than service.

Providers are not incentivized to change patient behavior. Why would they? If people with diabetes get worse over time, in the context of a fee for service model, that means more laboratory tests, prescriptions, and referrals due to the underlying poor glycemic controls. In theory, the more poorly controlled a patient becomes, the more profitable a provider becomes.

Self-reported clinical data from one of the largest diabetes providers in Abu Dhabi show that the average HbA1c of their patients is 7.4 %, despite, on average, patients being cared for at that provider for up to 10 years. This means the average patient they manage is poorly controlled (HbA1c > 7), and beyond the first visit, no improvements are generally seen. This is a prime example of the failures of the existing system to incentivize providers to continually improve care. If providers are going to get paid under the fee-for-service plan, they have zero interest in doing ‘more’ or ‘beyond the ordinary,’ further sidelining any innovation desperately needed in our industry.

Now imagine what this looks like for people with pre-diabetes? Why would providers try to invest in ways and efforts to reverse pre-diabetes and prevent those from developing diabetes? That seems insane in a fee for service model as it would mean essentially killing off their own future revenue-generating pipeline of patients.

With new data sets and machine learning capabilities, innovative providers are now able to practice predictive medicine in ways previously not possible. In order to do this, providers will need to reinvent their workflows, invest in technology/manpower/integration, and re-negotiate their payer’s contract. Are providers interested? Yes, I believe so. Will they actually practice this, and use Artificial Intelligence to help their clinical team become better clinicians? No. Not when you are strictly paid more for ‘Sick care’ as opposed to ‘Healthcare’. The Return-on-Investment for predictive medicine is, under the existing reimbursement structures, nonsensical for providers to practice.

Remote Patient Monitoring (RPM) and Remote Therapeutic Monitoring (RTM) CPTs reimbursement structures exist in developed markets. These codes were created primarily to allow providers to use technology in order to enhance their clinical offering and management of their patient population, with the goal of keeping patients out of expensive clinical settings and improving outcomes. The use of these codes, whilst in the clinical registry, are not in use anywhere in the MENA region. Even if a provider wanted to use these codes, chances are they will be outright rejected by payers.

These codes should be in-use and will encourage providers to innovate their care models. Instead, we see the constant push-pull scenario between providers and payers in the medical justification/rejection battlefield.

In the UAE, one issue with certain payers covering the expatriate market (which account to roughly 90% of total policies) is the annual renewal contract cycle. Payers are cognizant of the fact that loss ratios need to be controlled within a 12-month cycle. Coming back to problems 1–5, paying for these might be perceived as more expensive, although this is not true. Just a single inpatient visit caused by diabetes complications or an emergency visit by a poorly controlled diabetic would outstrip the totality of the perceived extra expense of applying all 5 solutions.

Payers are simply not interested in future savings as they simply have no guarantee of keeping those accounts beyond 12 months. The solution would be to obviously allow for extended insurance coverage periods which would encourage payers to work with value-based providers that reduce utilization, improve outcomes, and allow for all of the above to come into play.

This is a call to action. As providers, we can do so much better if we keep the patients’ outcomes central to everything we do. Having slogans such as ‘patient centric’ or ‘patient come first’ are nice, but they mean nothing if providers are not willing to innovate, measure and report their outcomes, and fight for what is required for the patient’s care, beyond the existing restrictions.